We started our November with a Christmas gift as weird as it sounds. We had been planning on getting the girls a kitten as a gift. Our friends had gotten one from a party they went to and I saw the pictures on Facebook and asked her about them. She put me in contact with the guy who had the kittens. He had a few Russian blue and black kittens, and we had hoped we could maybe find a Russian blue after Christmas when we were planning on getting the kitten. He had one left, a little boy, and he agreed to let us have him free if charge. After going back and forth about names, we finally agreed we’d call him Mr. Business.

The girls were already set to spend the night at their grandparents that next Friday, and we figured it was best to get him in the house and let our current cats meet him before the girls did. So, we headed to Kentucky and got him. He was the shyest of the group but he seemed fairly ok with being put into Maisys dog crate in the car. He laid down and was silent the whole way home which is the complete opposite of how Jericho is in the car (he screams the entire time and pees everywhere) so it freaked us out. I kept checking on him, and he was totally chill the whole ride.

We introduced him to the boys at home and they did not take well to him (which we expected). Hissing happened but we settled him into the girls room and we made it through the first night no problems. 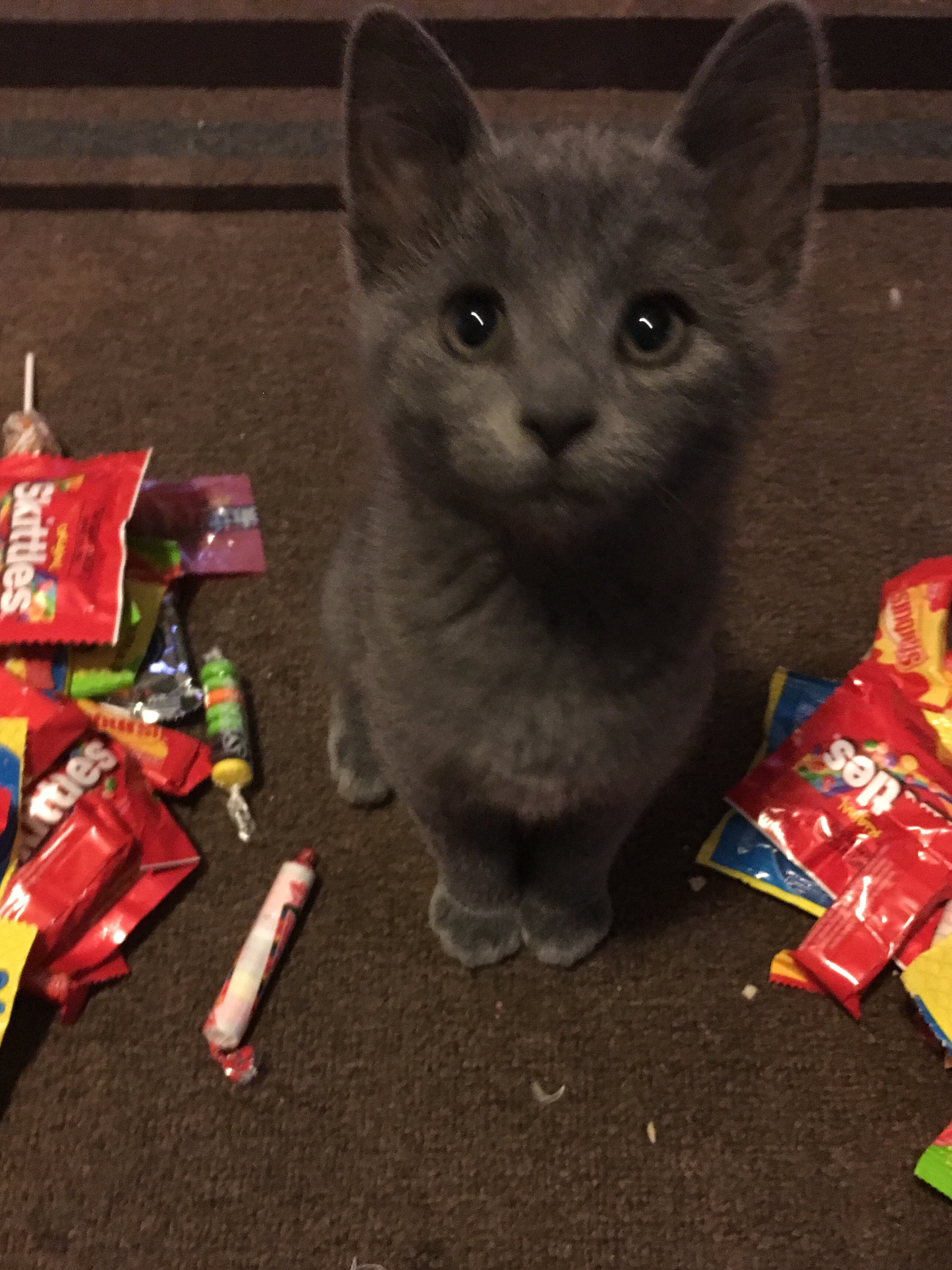 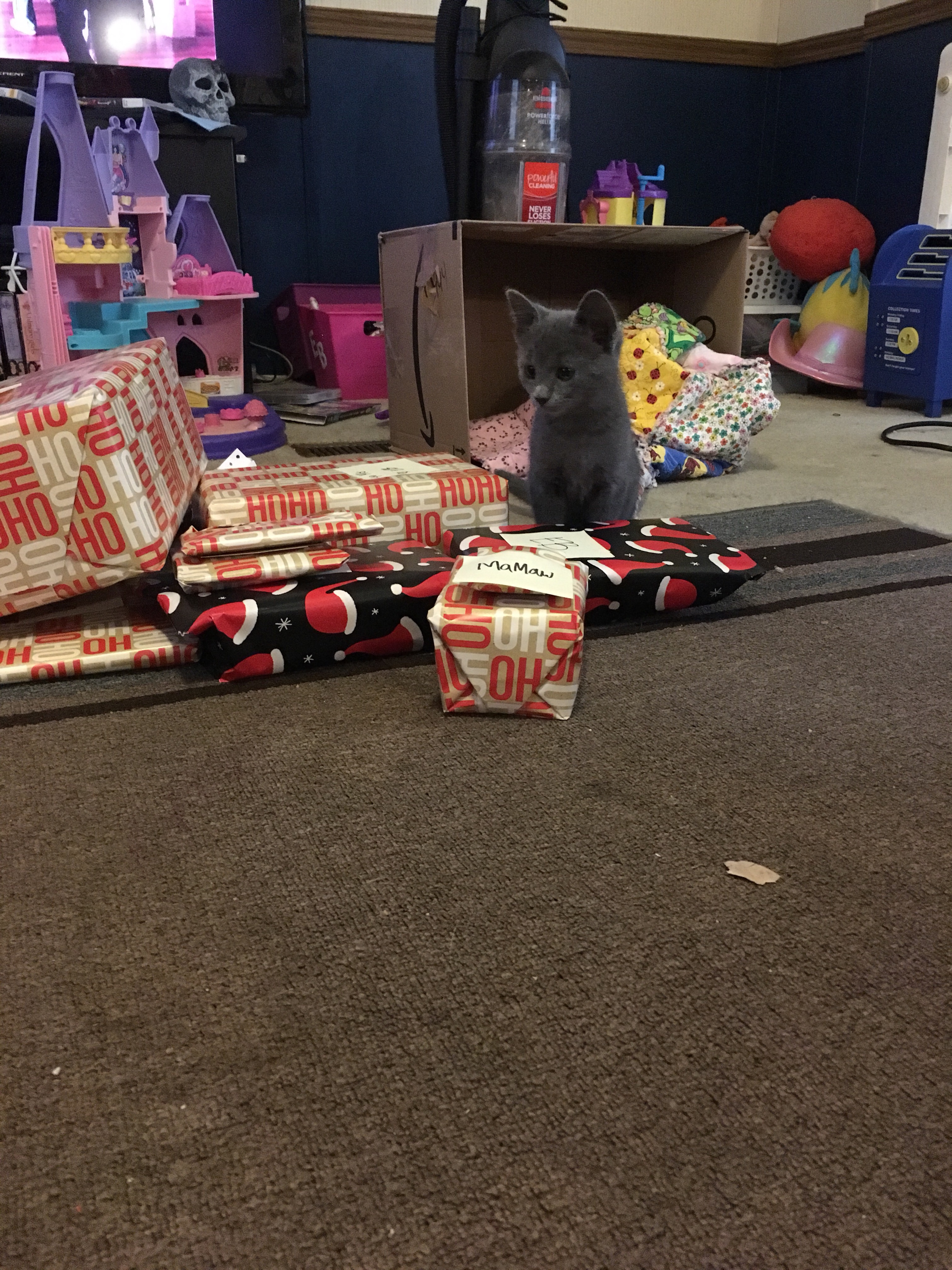 We went and got the girls the next day and I snuck in the house first and was ready for them. Ellabelle was shocked and thought we had borrowed our friends cat (who happens to be Biz’s litter sister). We clarified that he was ours to keep, and she has been over the moon since. 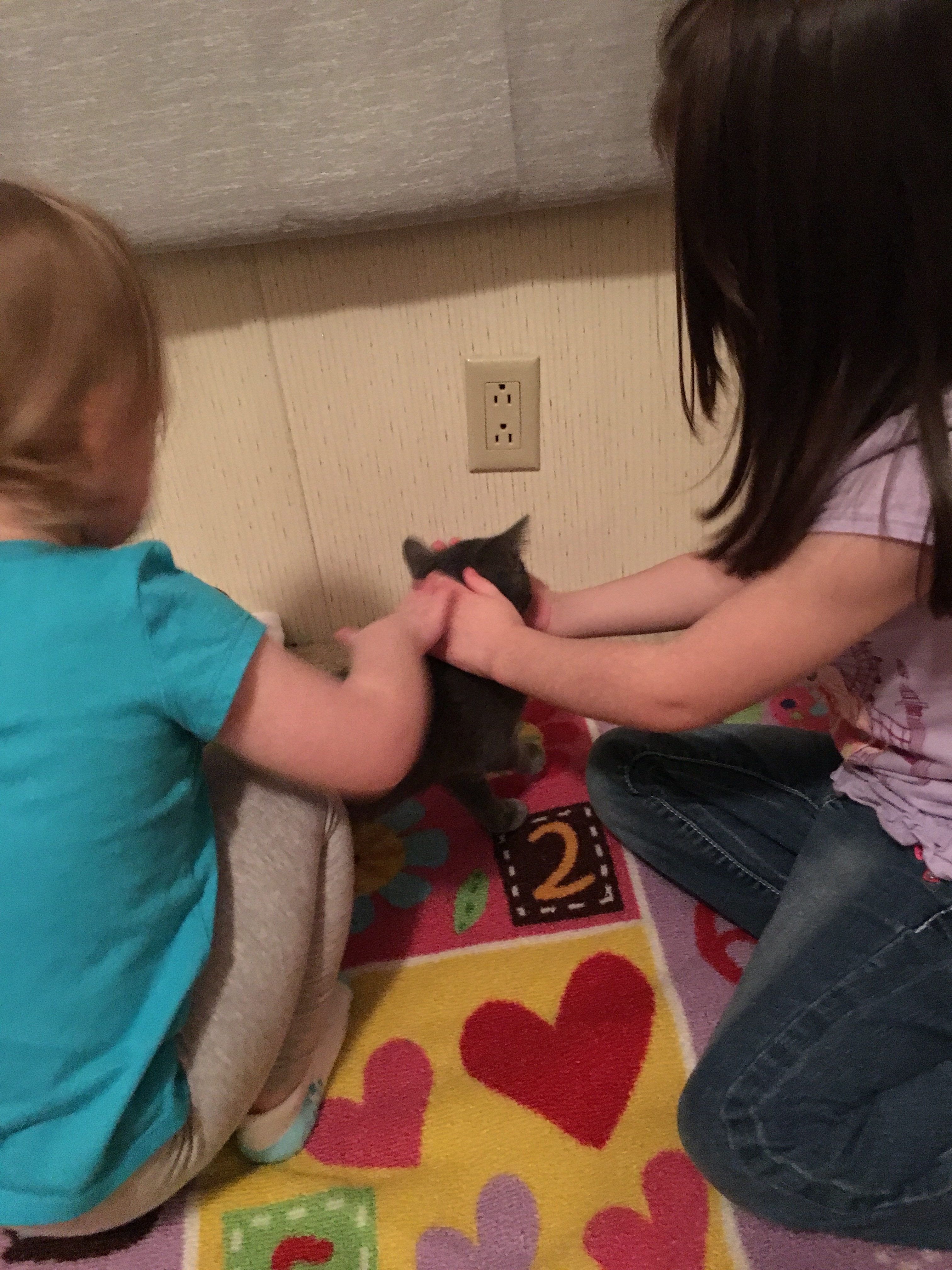 He’s settled in nicely with the girls. He’s so gentle considering he’s a kitten. He lets them snuggle him and carry his around. Like we could not have asked for a better cat. 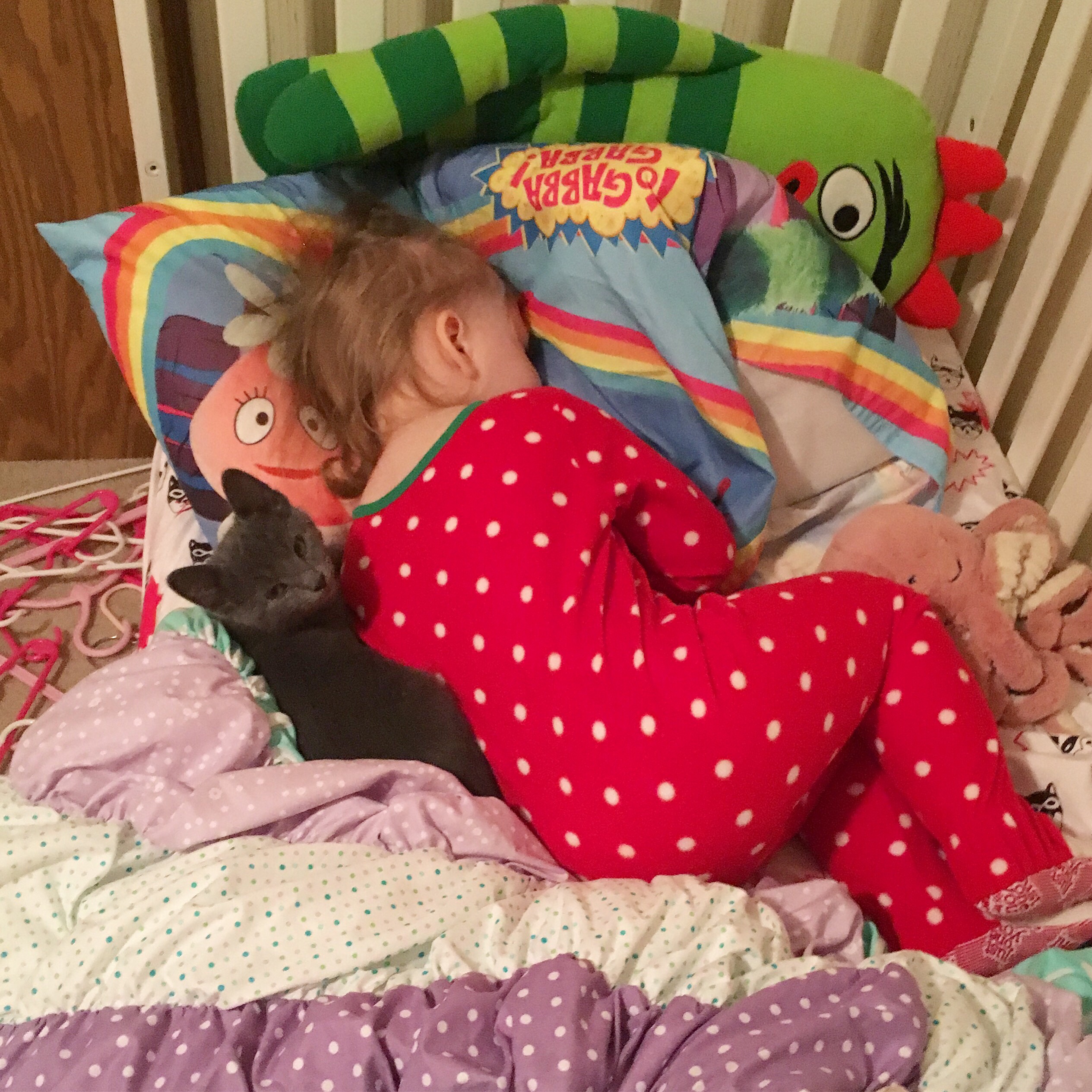 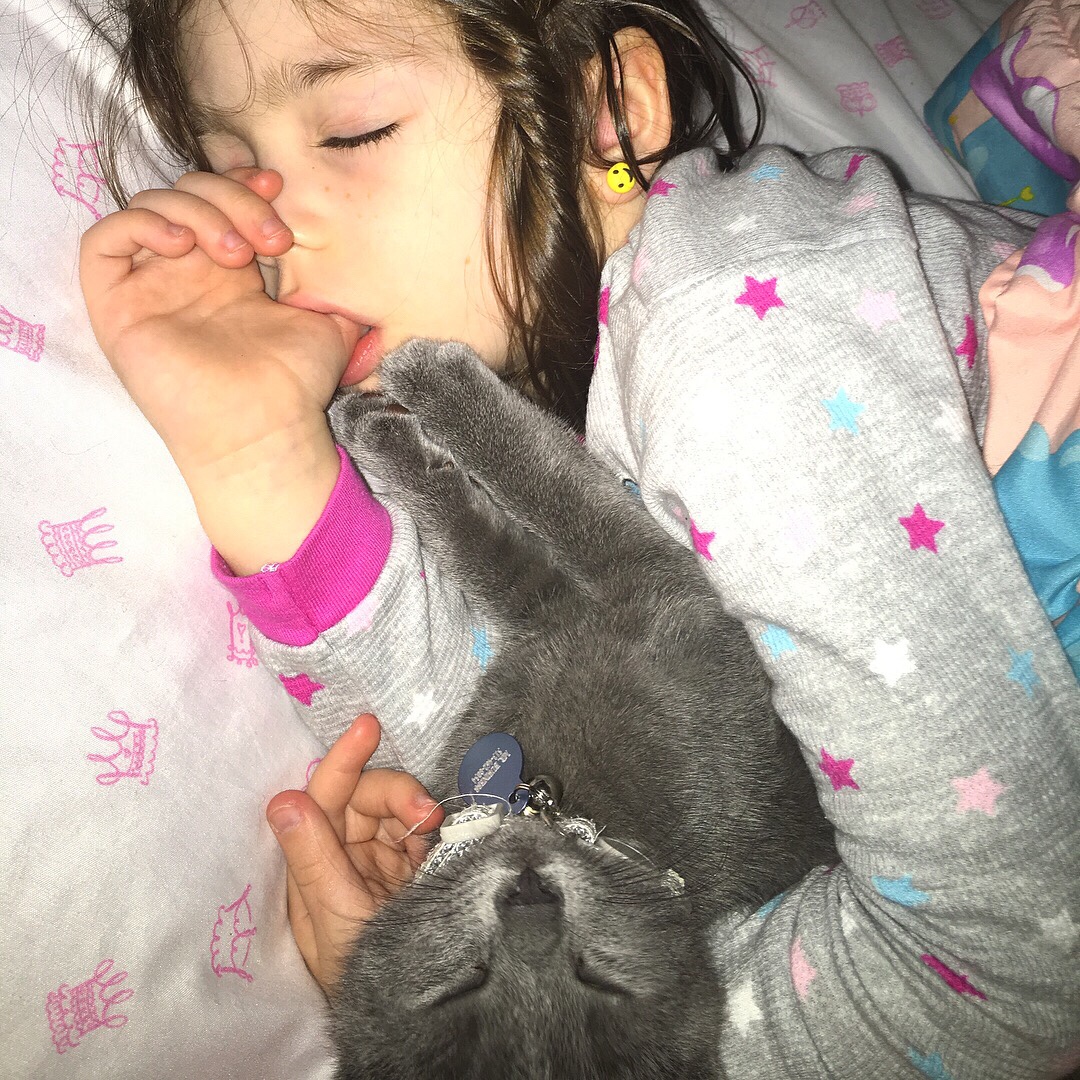 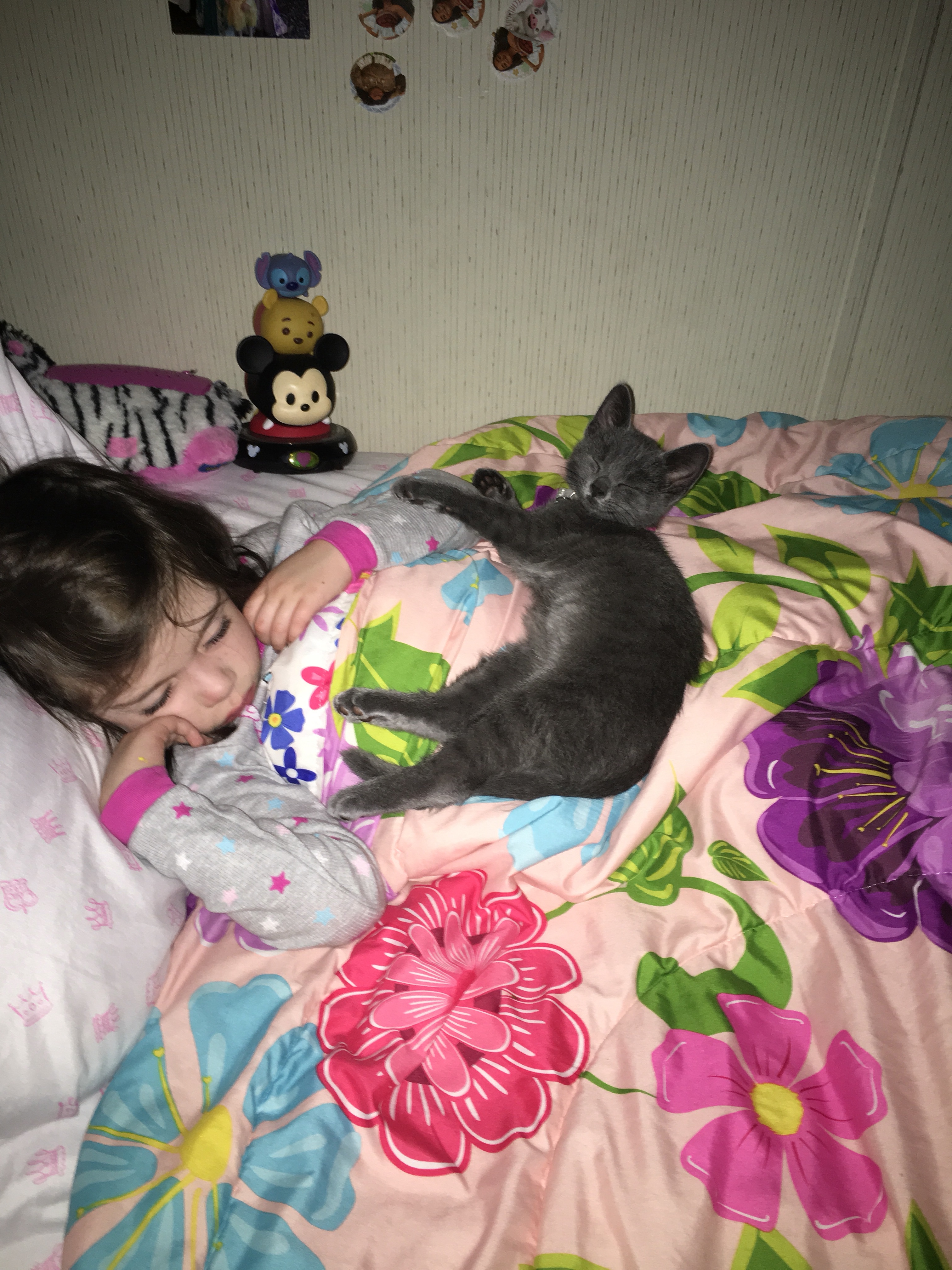 The boys don’t hiss at him for just walking around anymore. However, they don’t have any problem hissing when he tries to play with them. Poor Bellini is his favorite and he wants nothing to do with him. Maisy growls at him when he comes near her too but he likes to try to play with her, and she’s a grumpy old lady.

So besides getting Mr. Business, our November has been pretty quiet. Josh and I were off for Veterans Day, and Ellabelle had school. So we went to read to her class and be “mystery readers”. She was so excited. She loved having us there and she got to leave early and be a car rider instead of a bus rider that day. The simple joys of being 5. She still asks when we’re gonna do it again.

Our 11 year anniversary happened on the 6th, and we got to go out the next weekend to celebrate. Ellabelle had her first birthday party for a friend at school. So after we dropped her off, we went to the hibachi with just Matilda. She actually ate some of the food, and she loved the show and the one on one attention she got with us. 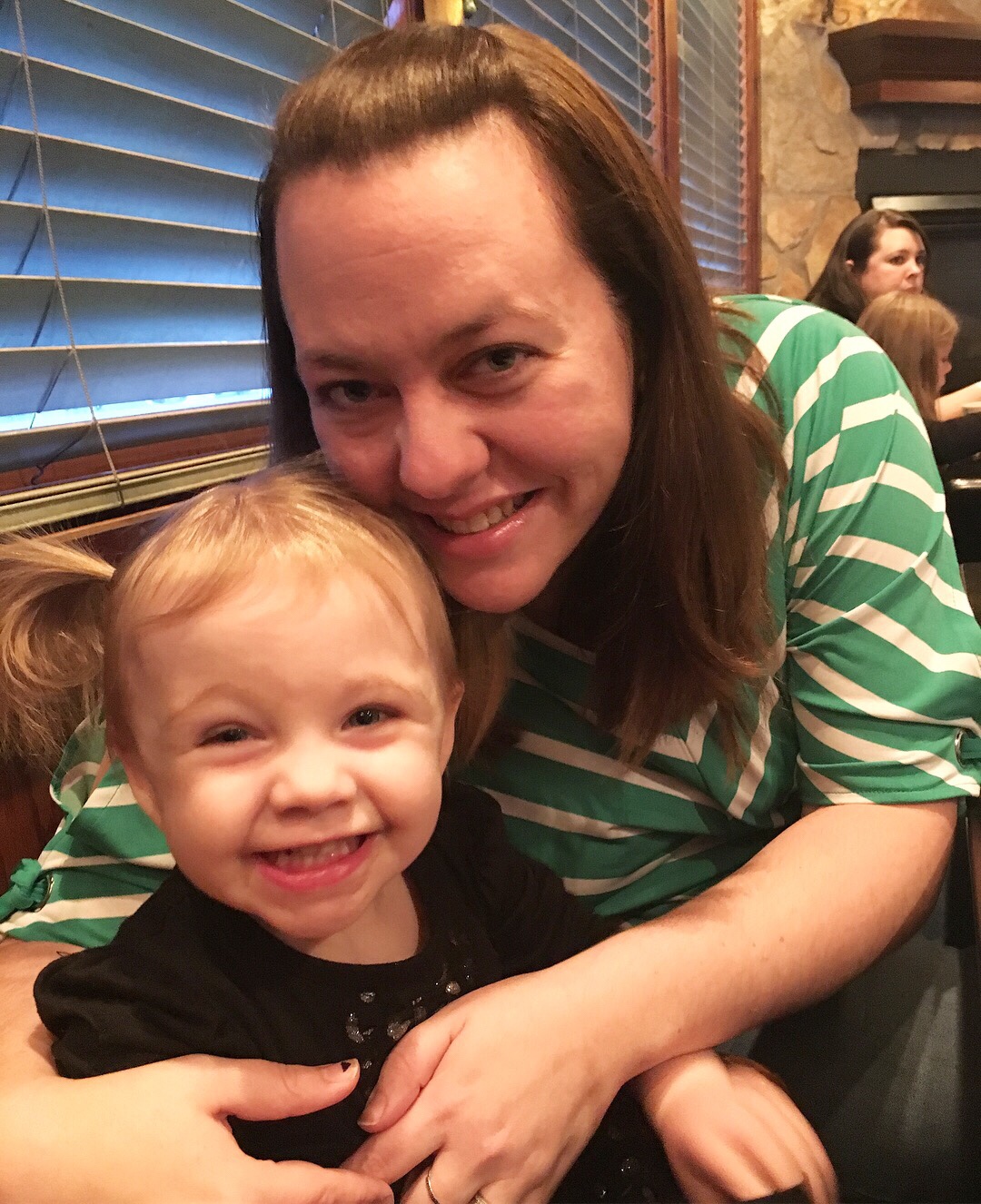 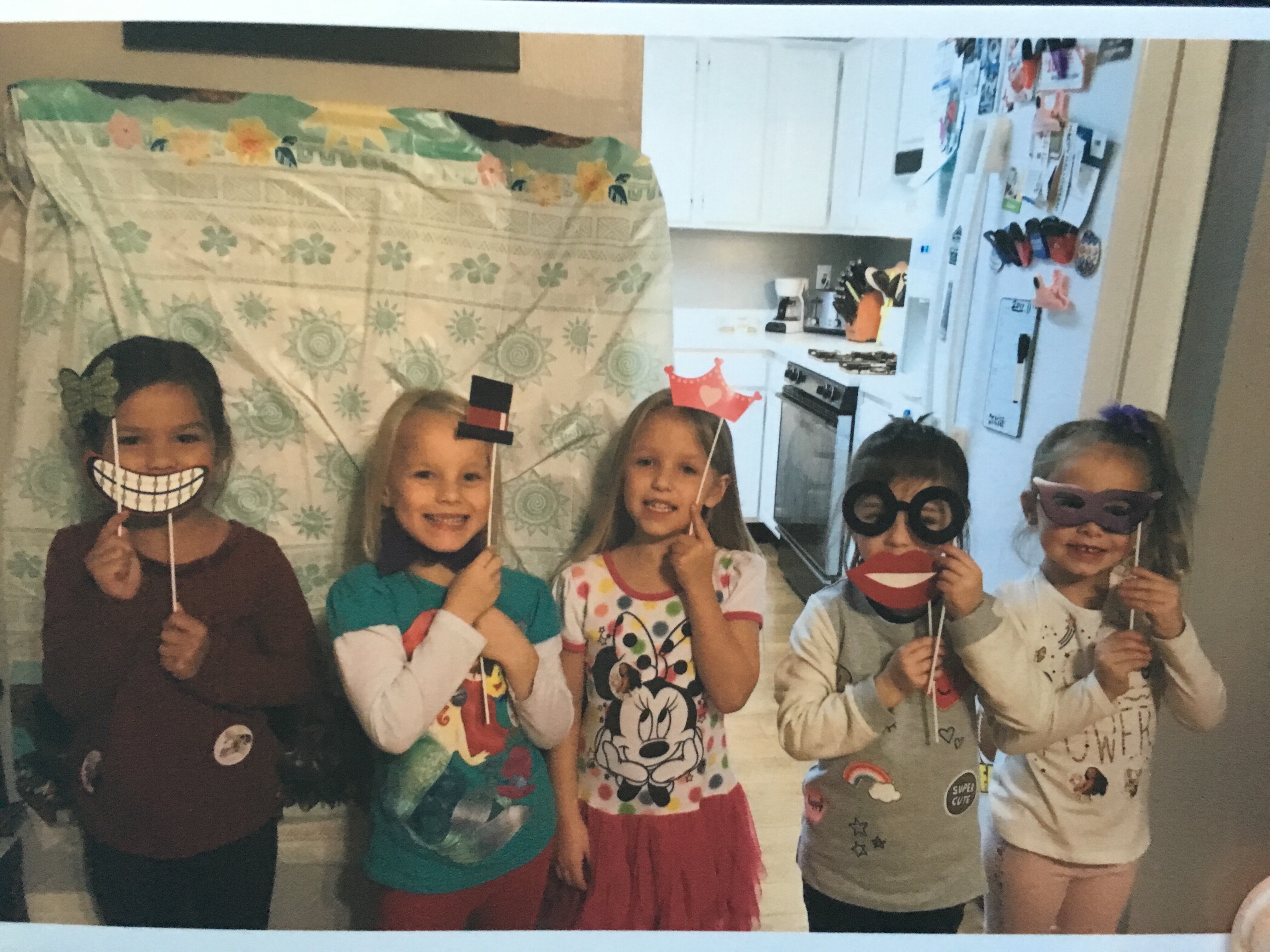 We also went out for Oma’s birthday at Chuy’s. The girls were a pain because they had an audience, but their audience loved their antics.

It took almost the whole month, but fall finally showed up. 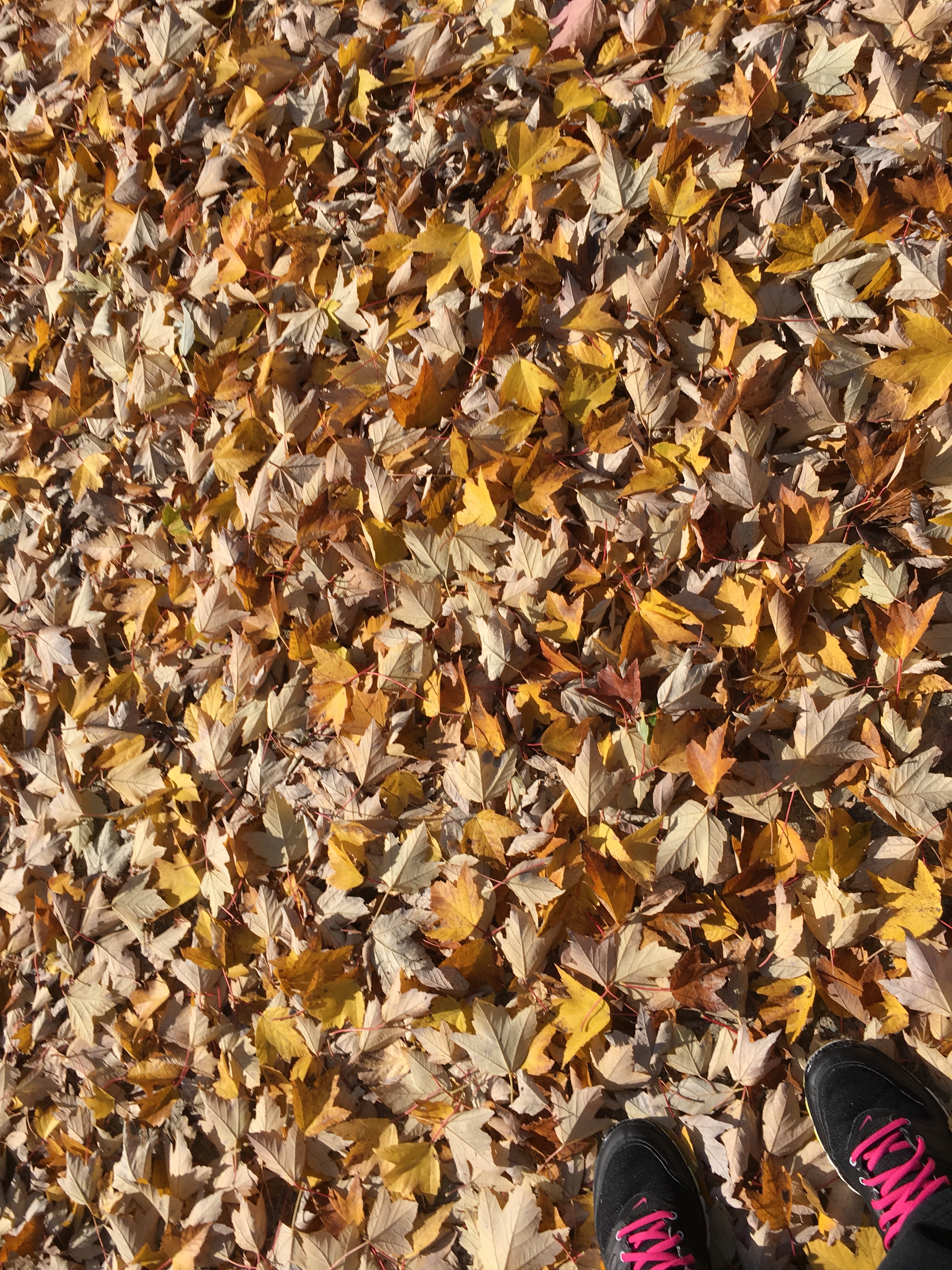 Ellabelle has been waiting to jump in leaves since it was put on our fall bucket list back in September. We had a big wind storm, and our big tree in back finally let go of it’s leaves. So daddy delivered on the leaf pile.

There’s the thing though, fall showed up just in time for Christmas. Our elf comes on thanksgiving night, and I like having the tree up for him. So the weekend before thanksgiving, we decorated. The girls loved it. The bottom of our tree is very ornament heavy, but I think that makes it extra special. They’re only little for such a short amount of time. Let the tree show how just how far they can reach. Mattie was so excited about all of it that she just kept jumping up and down, and yelling, “Kissmas! Kissmas!” I still catch her just examining the tree sometimes.

We had Thanksgiving at my Uncle Kenny’s as usual. I’m not a super huge fan of Thanksgiving. I like the message behind it, but, really, I’m thankful almost every day for what I have. It gets lost in the shuffle sometimes, but I have to constantly remind myself how lucky I am to have what I have in life. My job drives me crazy, but it’s a good job. I wish I had a bigger and better house, but I have a home full of love for my girls. My kids drive me to the point of insanity, but they are happy and healthy and I get the privilege of being their mom. I remind myself of this when I feel like everything hitting the fan (which does happen on a pretty regular basis). I don’t need a special day with turkey and trimmings. I do enjoy the company of my family, but the holiday shouldn’t be a once a year thing. I try to remind myself of all I’m thankful of and actually embrace the joy it brings every day.

We went and spent the night at Oma and Opa’s that night because Josh worked the day after. When we woke, we decorated her tree. It actually went better than decorating our tree because Oma was helping. 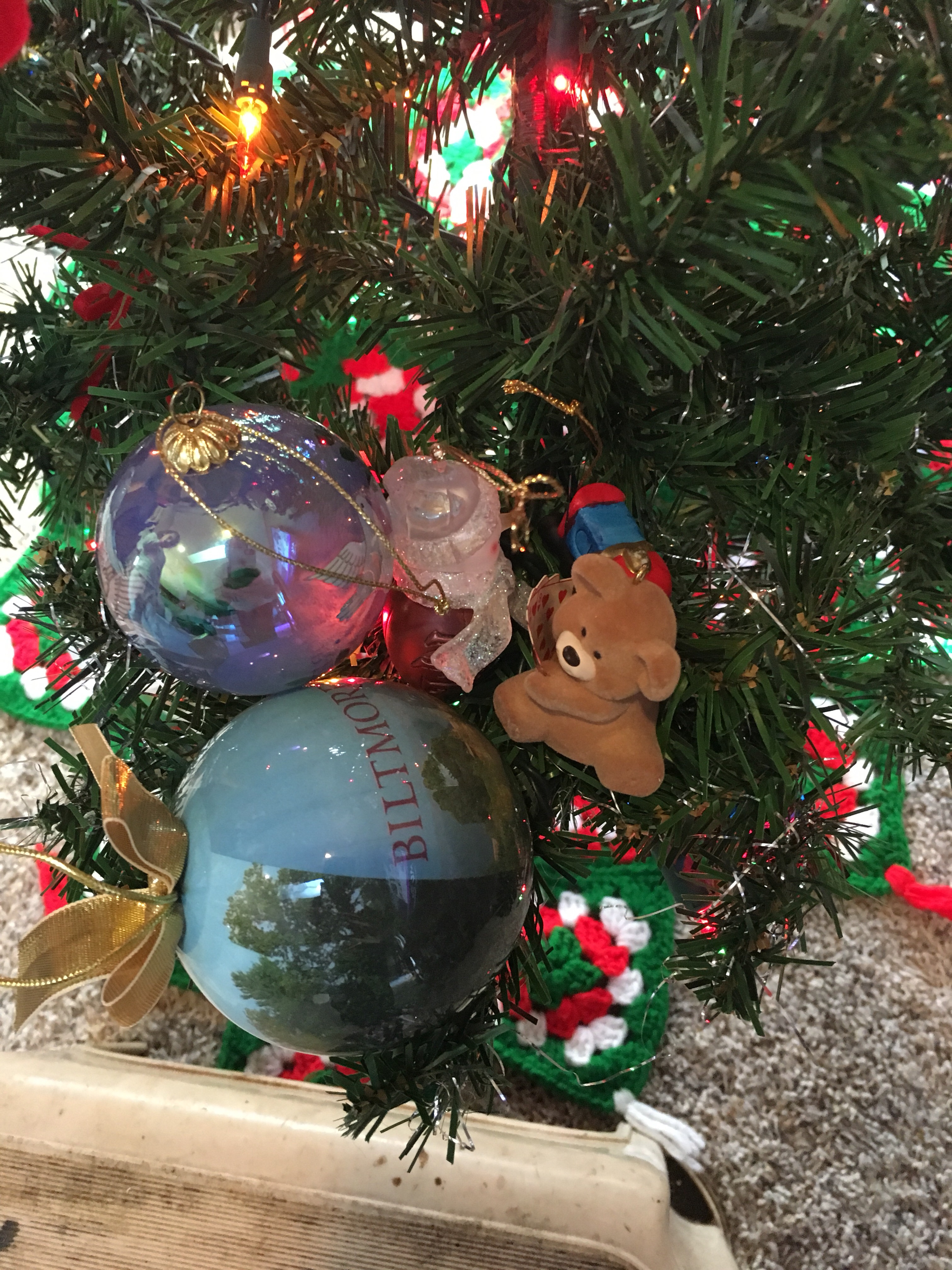 And, yes, Christopher Pop-in-Kins is back. He arrived at Oma’s house, and he’s been around since then being silly and hiding in funny places.

The month ended with poor Matz being sick. She had a fever and a cough. I had to take her to the doctor of antibiotics. The last weekend, Josh and Ellabelle ran up to see Mamaw and Papaw. When they got back, I had to run a few errands, so I took Mattie since she was finally on the mend. We went and grabbed Steak n’ shake for lunch, and I was surprised by how much I enjoyed eating with just a two year old. She was funny and sweet and she actually ate her meal. The people around us just loved her too. She’s such a ham 🍖.

<<
m so exited that we’ve finally entered December. The girls are counting down the days for santa. This time of year is always just so special and magical. We are super busy but in the very best way.