(Please note: this was written at 4am on a Wednesday. My baby had made enough noise to wake me up but not actually need me and I failed to return to sleep. The content of this blog is written in a state of slapstick insomnia. Enjoy.)

This sad story starts a few weeks ago. Or maybe it was last week. It’s hard to tell. I’m unemployed so days don’t really matter much. Anyways, not so long ago, I discovered the show Cake Boss on netflix. That’s when the trouble began. As it is with Netflix, I found a show and started watching it. All of it. Hours upon hours of back to back cake. It brought on the strong urge to eat cake. Oh and remember how I said in unemployed? This urge appeared during a non paycheck week. So, I got no cake.

I tried to make due. I scoured the interwebs for cake in a mug recipes, but each one let me down. Too rubbery. Too wet. Too bland. Nothing like actual cake. So my desire grew. And, of course, I continued to watch Cake Boss because one does not stop watching a show on Netflix until the whole series has been seen. So, on stroke of luck, I discovered $30 cash hidden in an almost 10 year old birthday card before pay day. And, yes, cake was the first thing on my mind. And yes, I barely let Josh finish putting the groceries away before I started breaking eggs and mixing shit in my kitchen. Then I had to wait. See my oven doesn’t work. It hasn’t for over a year. We use it as a nice giant floor weight. That’s like a paperweight only it keeps the floor from flying away. We make up for this lack of useful oven by using a toaster oven that has super awesome normal oven powers. It’s small and doesn’t bake evenly. So I had to make a choice: normally I would just make a super thick cake and put all the batter in a single 8×8 pan and let the edges burn and the inside be kinda raw. That’s how I roll. Plus my husband eats anything I bake for him. So that’s not a concern if I’m just baking for fun. This cake though was for me. It had to be good. So I opted to do the correct two pans and had to cook each one by itself. 30 minutes each. Then cooling time. It was agony after having to wait for what felt like an eternity for my cake.

They came out of the oven and, luckily (I use this word ironically), my toddler decided to do something destructive in the living room. It served as enough distraction that my cakes had both cooled enough to frost by the time I was able to return to them. I layered them and frosted them and, because of my Cake Boss obsession, I even pulled out an icing tip and added a border and design. This cake was to be my masterpiece. I had waited long enough for it. It deserved the love. I added some sprinkles because sprinkles make life better and viola! It was ready. And I dove it. I had a MASSIVE piece of chocolate cake that my child screamed to have some of. But I didn’t share. I made daddy share. This was all mine. I had waited so long and it ended up being so worth it. (Authors note: yes, I realize how much of a fat kid I am. I just love cake that much) This cake lived up to the hype in my head. I use a box mix because 1) I’m lazy and because 2) it is expensive to buy all the things you need for a homemade cake. But I modified it. I adjusted the recipe to make it less boxlike and more scratchmadelike. And it was magnificent.

Further proof of its amazingness: I ate some the next day. I usually bake and then eat the baked good while it’s fresh and then Josh eats the rest for like a week. I had cake for breakfast and after dinner. We finished that cake in 3 days. And then, we were sad.

So, Monday night the cake was gone. I mourned. I had to eat Cheerios for breakfast on Tuesday and who wants that? But Josh gets paid on Tuesdays. So, here’s the sad part of the story. By Tuesday night there was another chocolate cake sitting on our counter looking identical to the one we had just destroyed, and I honestly don’t think it’s going to live to see Friday. 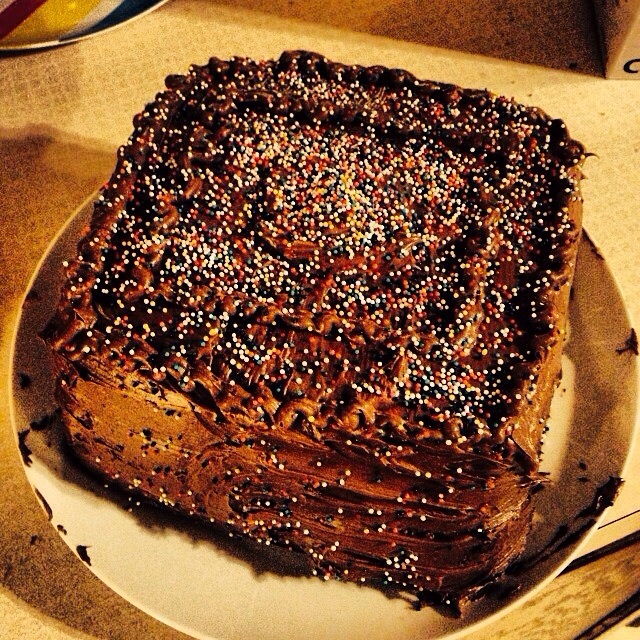 (PS: yes, I’m aware it’s the same picture as the first cake. I just added a filter and hoped you wouldn’t notice. Truth is: I was too much of a fat kid to take a picture of the second cake before I cut it to pieces. But, trust me, it looks just like this.)

I guess it isn’t much of a sad story at all. Guess it’s all how you look at it. I look at it as more chocolate cake. It’s sad if you look at it as two grown adults who are unable to control their need to stuff their faces with yummy sugary goodness. But I choose not look at it that way.

Btw, it’ll be the last chocolate cake for a while. The second one, that is. I’m going to refrain from my need for dessert (my kryptonite if you failed to notice). Plus, I’ll be baking Christmas cookies with my mom in probably about 2 weeks. 😉

So this a tale of two cakes. It was a delicious tale. It was a sad tale. It’s made me very hungry. I’m going to wait until the sun comes up before I go eat another piece though. I think I can manage that at least.

First of all, an observation about cats. They are fucking crazy. That being said, humans are even crazier because we take them in and love them and think we can change them and then continue to live with their douchebaggery even when trying to change them fails. Cats do what they want, when they want. They can jump to astonishing heights, are born with weapons attached their hands and feet, and they fit places they really shouldn’t be able to. They are born killing machines. Luckily, cats are also extremely lazy. They’d rather lick their butts than actually get up and do anything.

So, that being said, I have decided that in my next life I want to come back as a well taken care of house cat. Perfect life. Anyways, here are my two assbags, if you haven’t met them: 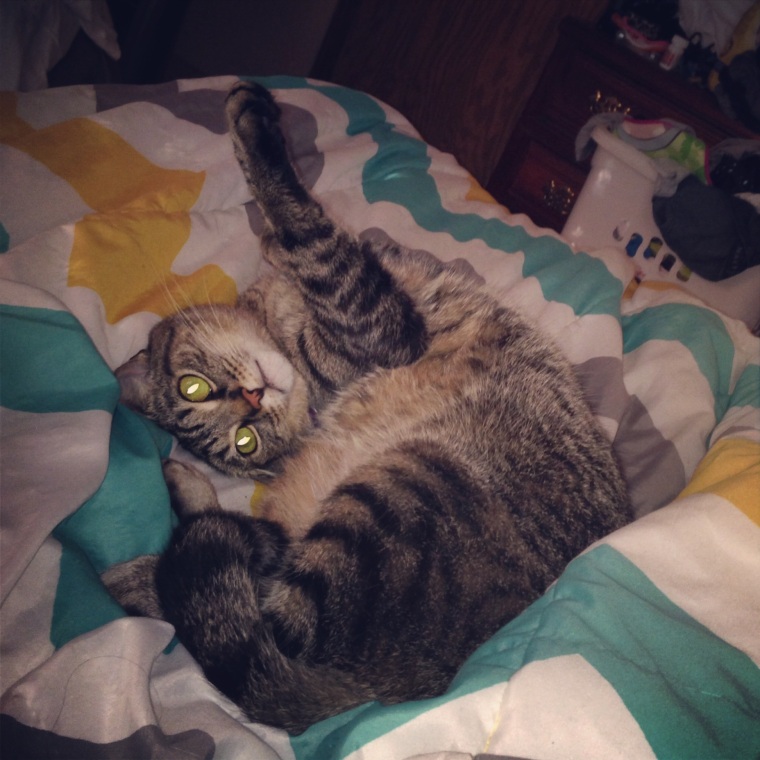 Jericho, the blonde one, is mischievous and eats off the stove every chance he gets, open flames be damned. Bellini, the tabby, well, he’s special. He talks to walls, chases his tail, and darts out of the room for no particular reason.

So, our cats, like many cats, bring us their nightly “kills” and leave them around the bed. Being indoor cats, these “kills” vary from stuffed mice to dog toys to kleenex. It’s a big production too. They don’t just leave it for you and go. They yowl at the top of their little kitty lungs from the point of the “kill” and continue yowling until they reach the spot they plan to drop the “kill”. Then they stand in place and make sure you know that they brought you that “kill” and once you make eye contact, they drop it and come over for their praise. And you better be ready to praise them or else they will get angry. I don’t know if this is normal for all cats, but for my two it is a nightly thing.

So, as I was wandering around the internet like I do, I stumbled upon this little diddy:

And I realized that it could be right. I mean, I do feel super special when Jericho brings me “kills” (after I’m done being annoyed by his loudass meowing). I always thought it was because he loved me. And when I say he loves me, I mean he’s a full blown momma’s boy.

Jericho will love on anyone who gives him attention, but I’m still his person of choice. So, I thought it was a token of his love. But maybe it really is because he’s afraid I’m going to starve. He picked me to be his favorite not because I’m loving and I care about him. No, he picked me because I am the scrawny hairless cat and clearly the other hairless cat (Josh who is 1ft and 200lbs more than me) is having no problem at finding food. I can’t jump, and he’s never seen me give myself a proper cat cleaning. He feels bad for me (which still may be too much credit of emotion for a cat, but still). I’m the sad wounded bird that fell from the nest and Jericho is wanting to nurse me back to health.

This theory, even if it is from the internet, makes much more sense than a cat being loving. Cause like I said, cats are batshit crazy. They know like three emotions: hunger, annoyance, and apathy. And based on the fact that cats clearly think they are superior to everything else on the planet, the fact that he’s helping me, and not vice versa, makes so much sense.

And I’m cool with that. I’ll take it. I can handle being an awful cat. It still makes me feel special. 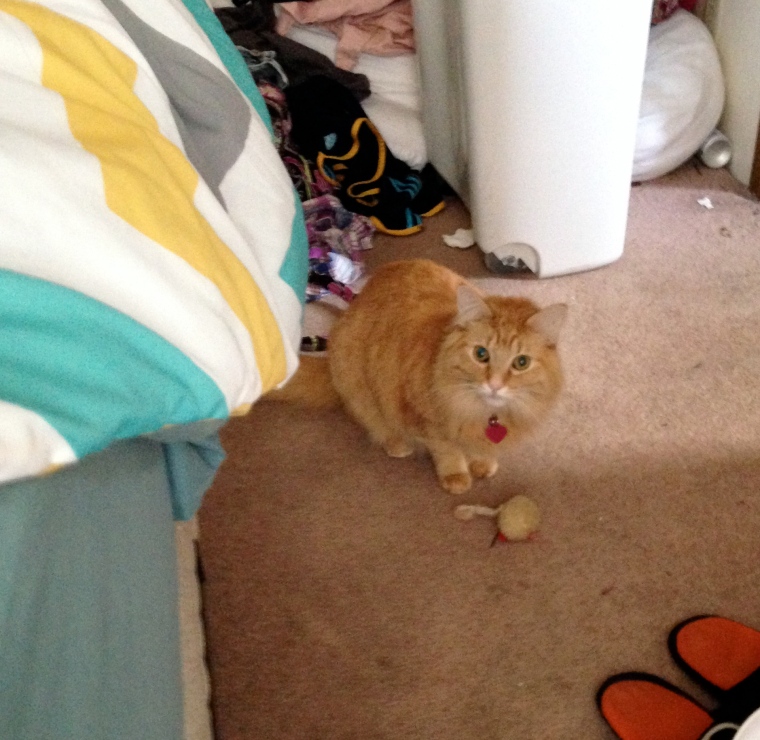 Ok, sorry, I’m rambling. But the point is that I don’t feel like myself. Yesterday Josh even said, “You are totally bumming me out. If you look it up, there’s a picture of you under “sad” in the Webster’s dictionary.” Yep. That’s me. It’s so bad I’m not even excited about Christmas. Like seriously. Christmas is my holiday. I’m usually aching to have the tree up already, but not this year. Not yet, at least. I’m not sure what is going on exactly. It could be all of the above. But I’m determined to be happier. Not exactly sure how that’s going to work. I guess I’m just going to wing it and see where I land. But no more Sad Amy. No more. She’s being banished from this house. I’ve got a few tricks up my sleeve that I hope will work. I’ll keep you posted. Until then, here’s a cat: